In my book – The Hare’s Vision – when the Irish hermit monk, Cormac Mac Fliande and his three friends – Melania the pagan priestess from Alexandria; his close friend and muse, Zachariah the Hare, and Simon of Bezatha, the young scholar from Jerusalem – first set foot in south-west Ireland in 575AD after their long sea journey from Alexandria, what sort of Ireland did they encounter?

The Roman legions had long ago left Britain (409AD) without ever conquering Ireland. England like much of Europe was a lawless place after the collapse of the first Roman Empire where various tribes and invading armies sought land and power. The Angles, Saxons, Goths, Lombards, Huns and Jutes turned much of Europe and England into chaos in the sixth century giving rise to the term ‘ the Dark Ages’.

This was not the case in Ireland where no invading force had set foot for a thousand years: not since 500BC when the Milesians or Gaels from Spain usurped the magical Tuatha de Danaan in Ireland and consigned them to their underground world of the sidhe.

It is true that in 575AD Ireland had many petty kings ruling local tribal lands, but it also had the authority of  four powerful provincial kings in Leinster, Munster, Connacht and Mide (Ulster no longer had a provincial king) and it had the High King sitting in Tara.  The people were bound together by a set of island-wide laws and a single language. This was unique in all Europe at the time. The French, Germans, Italians or English had no such unity of language or law at this time.

England did not achieve a state of nationhood until William the Conqueror imposed it after 1066. By the time of the French Revolution in 1789 only half those living in what is today France spoke French. It was not until as late as the 19th century that the Italians and Germans could claim any kind of nationhood: something the Irish had had for some three thousand years by that time.

Notably the Irish, while enjoying a common culture, language and system of law had no central government until it was imposed by the invading Normans after 1170AD. Uniquely Ireland’s system of law – the Brehon Law – was not imposed by kings or governments. It was agreed among the people at regular regional and national assemblies. Similarly there was no money and no tax as we would understand it. The people paid tribute in kind in the form of food and labour to local lords and in return they received protection.

However Ireland was not a land of milk and honey at this time (although at times it must have come close). In the mid sixth century the island was recovering from the Justinian Plague: a form of bubonic plague that had swept Europe and, as Ireland was not isolated, the island had suffered badly. Many of those leading the Christian monastic movement had died. St Finnian of Clonard and St Ciaran of Clonmacnoise were among those taken by the plague. In addition, there had been a devastating famine arising from crop failure over three bad summers.

In the story of The Hare’s Vision Cormac mac Fliande’s wife and sons and many of his kindred were taken by the plague. Like many in Ireland at the time, the devastation caused Cormac to join the monastic movement for both physical security and spiritual comfort. Cormac in fact left Ireland to escape the horror he had been through, becoming a hermit monk in the Egyptian desert for many years.

When Cormac returned in 575AD Ireland had recovered from this devastation. The monasteries were thriving as centres not just of the Christian religion, but as centres of wider study in astronomy, languages, writing, mathematics, philosophy and geography. Many of the large monasteries were also the hub of  self-sufficient lay communities: a reaction to the need for survival after the earlier famine and plague.

Communications were in the main by sea, river and lake with many monasteries located near water. However the Irish were also skilled road builders. There were several major highways linking all parts of Ireland to Tara – the Slighe Chualann, Slighe Mhór, Slighe Midluachra are just three. These highways were the responsibility of the kings to maintain. 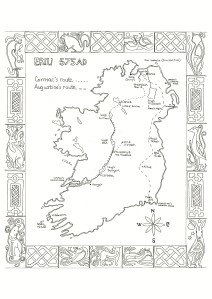 The foundations that were laid in Ireland in this post-plague era of the late sixth century led to a ‘Golden Age’ where Irish monks and lay scholars brought Christianity and learning to ‘Dark Age’ Britain and Europe. Such was the pre-eminence of Irish scholars that when Emperor Charlemagne came to set up his court in the late eighth century in Aachen and Rheims it was to Irish scholars, such as Sedulius Scottus and John Scotus Eriugena,  that he and his descendants turned to bring education to their people.

Sadly much of Ireland’s ancient history has been largely re-written under Roman and English rule casting the Irish as a barbarian rabble in need of ‘civilising’. The existence of such a concept as an ‘Irish Civilisation’ did not sit well with this need of others to conquer and subdue. So Ireland’s ancient civilisation was largely expunged from record.

The Hare’s Vision is available from: